We are a narrating species. We talk to ourselves, in our heads, about anything and everything to try and make our lives into something coherent.

It’s in our blood, it’s in our genes. I guess we need it to survive.

We think and talk about our past, our relationships, our careerplans, the news and everything in between and we try to make sense of it all.

As this constant narrating is a human trait I’ve decided to employ it for a problem that I’ve been having for two deccenia now. The problem is this: when I was told my brother had suddenly died, half of my (figurative) heart was ripped out and I’ve been living with half a heart ever since.

(My mother is convinced I’ve got PTSS since that moment and judging by the chill in my body and my neck hairs standing on end when she told me this only a few weeks ago I’d say my body agrees to some point. (The thing is: I feel nothing thinking back to that moment. Nothing. I think I’ve done EMDR on that moment. I know I’ve felt emotions about that moment before but now: nothing. This might be indicative. Something to keep in mind and address at a later time.))

I was told in the dead of night. By an aunt who drove cross country (that’s two hours maximum in my country) and brought my other, younger, brother. My parents were out of the country at that time. The previous night, just before I fell asleep, I had congratulated myself with a pretty nice life. I was content, if not happy. I went to sleep and a couple of hours later the doorbell rang and I was told, while still groggy with sleep. I slammed forwards, doubled over, and screamed. That’s when I saw my heart ripped in two, a very strange experience. It floated away to the right of me.

I tried to postphone having to stand up or breathe in again because that would mean the beginning of a series of breaths, in a new world, with a new order. Then my younger brother was in my arms and we held on to each other. Then the whole thing began: travelling back to the hometown; getting hold of my parents; arranging the funeral; returning to university. Many new breaths and a life in a new, unknown direction.

Up until then I didn’t know me and my deceased brother had been two people. We only differ 20 months in age and in my mind we had always been one. Called “us” or “we” (but in a not exact term).

We both brought things to this entity. I was the outgoing, conquering field marshall. I would defend us both and coach him in a world that perceived him as a weird smart kid. I looked to him for guidance on how to be (true to) yourself (how to behave at the new school; how to explore which hobby you enjoy; how to handle the views that our upbringing installed upon us etc.)

I think you could say we were some sort of twin.

Well, in 1993 he died suddenly (myocarditis) and he was only 19 years old. I was 21. For the next three to four years I was in a state of shock. I walked around with a big hole in my torso and the cold wind swept through and the severed heart threads that bind us to our loved ones where trailing behind me in the cold and the dirt.

I mourned for seven years (unnecessarily prolonged by anti-conception drugs. Stay away from them, they are poison.). I graduated, found a man I loved and secured a home and a job. When I finally came to my senses (stopped the drugs and mourning stopped within one day. Ridiculous.) I could address this hole in my body. I slowly learned to fill it. With self love. With interests to pursue. With new experiences, with new people.

It was made clear to me that having half a heart is not normal. I visited a Shaman to try and help me. She said I had stolen a part of the soul of my brother and it had to be reunited with him. She did so. I felt a bit better.

On another occasion a healer massaged trigger points on my feet and lead me on a trance journey. I was in the womb and I was not alone, we were two. We were giggling. Birth was about to happen and one of us had to go. “See you soon” he said and I was born. I had never been one, I had always been two.

I went to therapy and learned to become an adult. Trust my feelings. Get over my daddy issues. I didn’t tell about the shaman nor the foot reflexology. My therapist was RET and these were silly things. We bumped into reverse transference and he treated me as if I was his daughter. We called it quits. I had learned to accept the existence of emotions and to not rely on mental constructions of the world.

I married. Quit my job, started a company, went to art school, got ill, was happy. I live my life. Once a year I cry about my dead brother but his passing has become a normal, healthy part of my life.

Now it’s 2015. My brother has been dead for nearly 25 years and I’ve been one-not-two for all that time now. I learned to live again, as one. I’ve learned a lot. I’ve grown mature. There is no trace of my brother anymore, not in life, not in me. Life has moved on.

Then tonight I watch the BBC series River. It’s about a policeman who sees his partner get killed. While he searches for the murderer he still sees her, his partner, around. They talk, they joke.

At one time he goes swimming with her little brother who’s blundering through life and, in his minds eye, she joins in. It’s night and they have fun in an out door swimming pool. Splashing and giggling. These are not his (altered) memories of her anymore, now he is narrating new plotlines around her.

That’s what triggered me. I’m a narrating human being. I could tell myself stories about my brother as if he were here now, as if he were alive. I could think up his wife, his kids, his dogs and the many cats they have. It’s easy to do, it comes natural to my species. And it comes natural to me because my brother is still a part of me, as there is still a part of “us” he could occupy.

Because it was not a piece of his soul that I lost or stole 25 years ago. It was a piece of MY soul. It was my part of him. The guiding part, the together-in-this-weird-world-part
I lost something then and I have not retrieved it yet.

I talked about this to my husband. To check whether not this way madness lies. Thinking up stories about a dead person? Sure madness.

At first he thought so and he warned me. But after we talked some more he narrated it in his own way and gave his consent. Because if you change the wording it becomes something different. Something more sensible.

Because what I lost back then was the part that allowed me to be frivolous in life. To be yourself in the world, without minding what other people think. To play. To explore, for interest’s sake, not for profit. To waste an hour, a day, dreaming. To follow an interest, just because you want to solve a puzzle. It was the part that let me join hands with intuition and skip away along the path unknown, without reason and caution stopping us and demanding justification and cause.

It was not even that, our contributions to “we” were not as black and white like that. Not so polar. But is was something like that. Something that gave me courage. Freedom. Confidence. Escape from trying to control everything. From trying to cover all aspects.

My husband now says I’m going to personify my intuition and will be using it as a guide. That’s not madness.

I say I’m going to narrate the life my brother is living now, in my mind. I know I can do so because I’m an expert on my brother, after all, we were never two. You can say I use my intuition. I say tomato.

I know my stories will not be reality outside of me, it will be all in my mind. But it will be “us” again and I will not be so alone in my own internal existence anymore.

Because that’s what is the real tragedy of having your heart ripped in two unexpectedly, that you suddenly find yourself alone. More alone than you ever thought possible, because you didn’t know you were two.

I want to think we never were. Two.

(One may feel like I’m negating the very existence of my brother by thinking about him this way. But you see, I’m talking about his existence within me now. That’s somebody else from the individual who was born four decades ago and died two decades later. A person whom you might have known, in your own right. Your own truth. True story.) 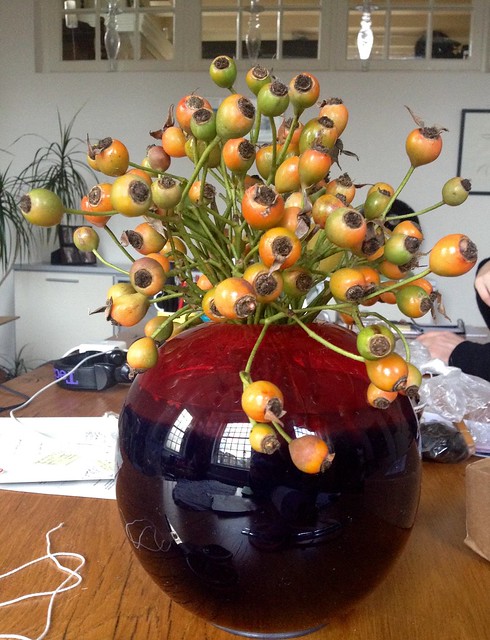 We trimmed the white rose outside and now I have a Dutch master painting resonating in my house.

I’ve started DIY Reverse Therapy and that goes very well. In the mean time I must not burden my body so I try to eat the good things. I’ve grown sensitive to chocolate (!!) and try to temper eating that. It’s probably the copper in it that makes me bad. I’m taking Zinc every day now and I need it.

I’ve been going out for whole days. Visiting a friend or attending a knitters’ party. By train. Walking in the city. Having fun, being happy

I do allright after such days. Do need vigorous resting afterwards but since one of my RT messages is that I am allowed to chill and relax for joy that’s working out for me. I do need to practise a lot though because the message is hard to learn. Being productive is so drilled into me, it’s our national Calvinism tripping me up.

“we still see the influence of Calvinism in the values and beliefs of the Dutch.

Calvinism dictated the individual responsibility for moral salvage from the sinful world through introspection, total honesty, soberness, rejection of ‘pleasure’ as well as the ‘enjoyment’ of wealth.”  quote Eleonore Breukel

I’m still very much a beginner. Make lots of mistakes. Mistakes take time with ME.